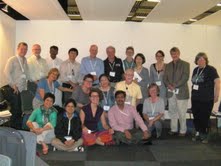 As part of the conference program, Carol Cohen (Co-Chair of the IASWG Commission on Group Work Education) and Tim Kelly (Co-Editor of Groupwork) convened a Special Interest Group for people who work with groups around the world.  Our purpose was to provide an opportunity to talk about the challenges, joys and demands we encounter – and make connections for the future around our common concerns and interests.  Among the 25 participants were people from Austria, Belgium, Canada, Finland, Hong Kong, India, Israel, Japan, Malaysia, Nepal, Norway, Spain, United Kingdom, United States, and West Indies.

As noted in the abstract describing the Special Interest Group Session:   Experiences with groups for action and impact around the world suggest that members and their communities desire the opportunities promised by group participation. Group membership appears central to human experience and the promotion of social justice.   However, while the power of groups is indisputable, people who work with diverse groups rarely have the opportunity to talk with each other about the connections, challenges, joys and demands they encounter.

A copy of the Special Interest Group Abstract and summaries of the other presentations are available at: http://www.swsd-stockholm-2012.org/Pdf/Abstract-book-FINAL.pdf

What are your groupwork interests and activities?

Groupwork Challenges in my country?

Keeping up the latest new ideas

Less time allowed for training and education in groupwork

Students come from different castes and classes. How do we work with these different students?

There are groups in in my country. Often these groups are in “clubs” (e.g. women’s club, children club, farmers club). Youth are now starting to organize into groups themselves. Sometimes the groups get stuck and may need help getting unstuck.

Working with parents whose children are “gender creative” or not sticking with their assigned gender identity. There are difficulties recruiting.

Self-organization – people experiencing an issue and form their own group. But the self-organizations need some help sometimes, may need external facilitation, but they must need to do themselves.

Cultural issues impacting on teaching (e.g. in some countries students may be passive learners and not want to take an active role in class activities)

Grants requiring evidenced based curricula in groupwork services.  Often the curriculum doesn’t work, and then what do you do? How do you justify what the group did? The members threw out the curriculum and designed their own group and it was good… but then the agency had to justify what they did to get funding.

Self-organizing groups can then get bogged down by growing into advocacy or survival and have trouble morphing into a community organization.

Praxis from helping each other and moving into changing society

Challenge – divide between research and practice and teaching

Community work by students. Students work in groups and go into the community to do projects. Out of 7 groups of students, 6 groups did successful community projects. Students learned to use groups but also made changes in communities

Women’s leaders development group for professional development. Women started supporting each other in their development.

How can we connect more with each other at conference and beyond?

Questionnaire looking at social work with groups in different countries